One of the strengths of grain sorghum following grain harvest is that the remaining residue, known as stover, serves as a great groundcover during the winter or can be used for grazing or harvested as hay. Sorghum’s high ratio of leaves and palatable stems makes it an excellent choice as feed for cattle. Another advantage of sorghum is that its residue height following grain harvest allows cattle to consume the stover even in those regions where snow may accumulate in the field.

The energy and protein levels of grain sorghum support cows in mid-gestation to late-gestation, but supplements may be needed for late-gestating heifers. In a recently completed study at Oklahoma State University (okstate PSS-2607), the average crude protein of nine sorghum varieties was 9% at one location and 10.4% at a second location. Total digestible nutrients were approximately 58% at both sites. 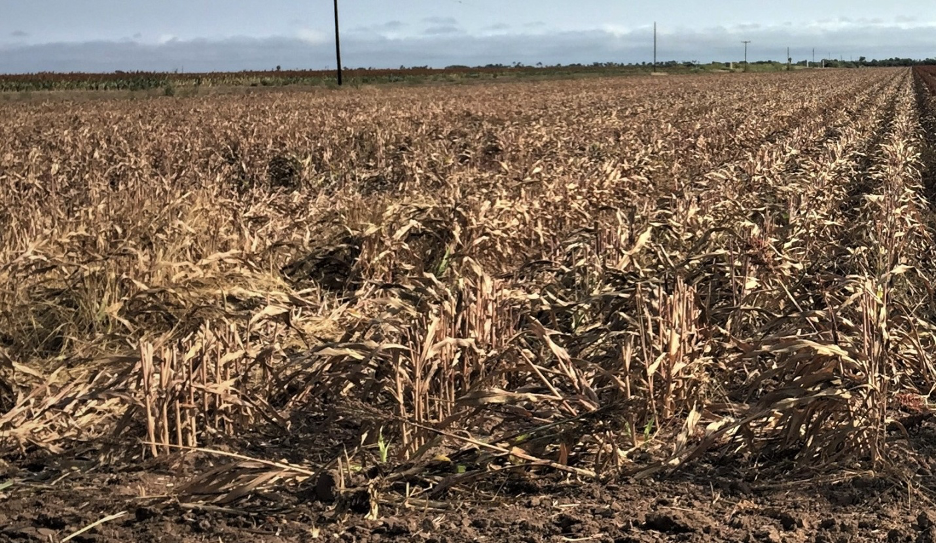 To estimate stover quality, as a general rule, fields with low grain yield often have the highest quality. After all, an important factor in determining stover quality is nutrient and sugar content. Because less nutrients and sugars are required to produce the kernels in a low grain yield, more nutrients and sugars remain in the stems and leaves of the stover, improving quality.

In determining stocking rate, growers should estimate the amount of available forage. For an average grain yield, a rough estimate of total dry stover remaining after harvest can be calculated by multiplying the number of bushels harvested by 60. However, in the Oklahoma State University study when this method was used, the estimated stover was underestimated by as much as 46% and overestimated by 66%, depending on the particular hybrid. Also, all of the stover cannot be consumed by the cattle, and some residue needs to remain as cover to protect the soil. A conservative estimate is to multiply the number of bushels harvested by 10 to determine the amount of the most palatable and highest-quality forage. By using this method, a field yielding 80 bushels of grain should have approximately 800 pounds per acre of quality dry forage for grazing. Also, growers should note that the quality of the stover will decrease as cattle first consume the leaves and more palatable portions of stalks, in addition to weather having a deteriorating effect over time.

Compaction from grazing is a concern of some growers. Yet, studies from the University of Nebraska (UNL EXT EC278) have shown no reduction in yield to corn or soybeans following grazing of stover in both no-till and ridge-till systems. The top 3 inches of soil may be somewhat more compacted compared to ungrazed areas, reducing water infiltration, but this compaction can largely be avoided by not allowing cattle to graze late into the spring when conditions become muddy. In addition, not permitting overgrazing and leaving a significant amount of residue on the surface will go a long way in preventing compaction issues.

Growers may have some concerns about the crop residue and nutrients that are consumed by cattle but would otherwise remain on the field. However, most of the nutrients are returned to the soil in the form of manure. Normally, grazing removes less than 50% of the stover, leaving the remaining residue on the field.

On a cautionary note, growers should be aware of the risk of prussic acid (cyanide) and nitrate poisoning. If grain sorghum is harvested prior to a killing freeze or if glyphosate was not used to kill the plants, any new growth potentially can contain high amounts of prussic acid. Cattle should be kept out of these fields until a hard freeze has killed the new growth. Growers should wait five to seven days after a killing freeze before allowing cattle into the sorghum field to provide sufficient time for the prussic acid to dissipate. A complete discussion on prussic acid can be found on the United Sorghum Checkoff Program website at https://www.sorghumcheckoff.com.

Nitrate poisoning is generally the higher risk when grazing sorghum that has been killed by a hard freeze or with glyphosate. Nitrate accumulates in plants that have been stressed due to any number of factors. Unlike prussic acid, the accumulated nitrate does not decrease once the sorghum plant has been killed. Under normal growing conditions, nitrate levels are generally quite low in sorghum stover following grain harvest. See the Grazing Livestock page on the Sorghum Checkoff website for more information on nitrate in sorghum.

The actual risk of both prussic acid and nitrate poisoning to cattle grazing sorghum is quite low. However, if factors are present that could potentially lead to either of these conditions, growers are strongly encouraged to have the forage tested prior to grazing.