Reduced and no-till cropping systems have become increasingly important as growers recognize the benefits of these systems to soil health, sustainability, yield and profitability in many regions of the U.S. However, early in the season, increased surface residue results in cooler soil temperatures at planting leading to slower emergence and reduce root growth. This reduced root growth results in a lower rate of nutrient uptake reducing early season growth and plant health. The use of starter fertilizer at planting can help minimize the effect of cool temperatures.

Starter fertilizer can be applied in band over the row, in the seed furrow, below the seed, on the surface to the side of the row, or on the side but below the surface. In-seed furrow placement, often referred to as ‘pop-up’ placement, has been shown to increase early season growth, but any yield advantage to this treatment has been inconsistent. Part of the reason for this is that the rate of nitrogen placed in the seed furrow must be kept low, generally less than 8 lb/A, depending on soil type, to prevent injury to the germinating seed. However, much higher rates can be applied when fertilizer is placed a small distance from the seed. 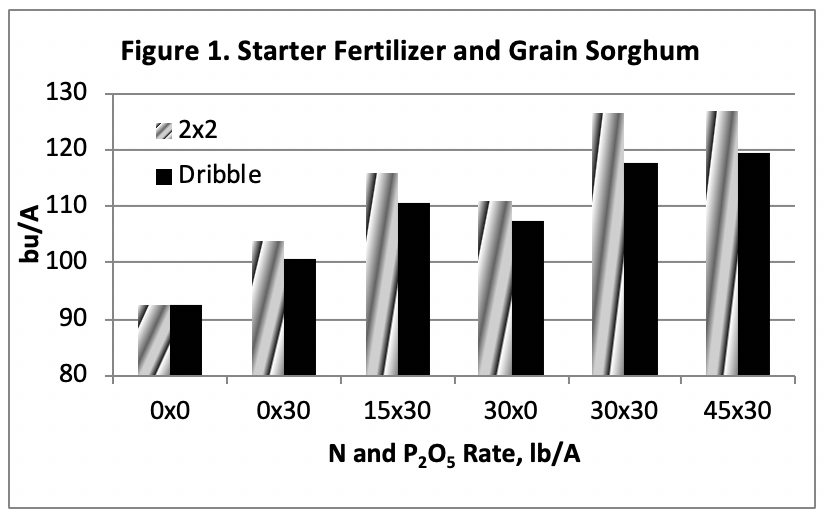 In a three year study conducted in Kansas, positive yield results were obtained by placing nitrogen and phosphorus either dribbled on the surface two inches from the row, or by injecting the fertilizer two inches to the side and two inches deep (Figure 1). All plots received a second application of N following planting to bring the total N in each plot to 140 lbs. A combination of both N and P were needed in the starter mix to maximize yield. Best yields were obtained with 30 lbs of N and 30 lbs of P applied two inches to the side and two inches deep. Both dribbling on the surface and injecting the fertilizer improved yields, but in all treatments injecting provided the highest yield.

Another major benefit to the starter fertilizer application was the decrease in time it took the sorghum to reach maturity. Sorghum reached mid-bloom eight days faster in the 30×30 treatment compared to when no starter fertilizer was applied.

Decreasing the time it takes sorghum to reach physiological maturity can potentially make a big difference at the end of the season to avoid damage from an early freeze event. In the Kansas study, grain sorghum reached 15 percent moisture 13 days earlier than the sorghum that received no starter fertilizer (Figure 2). 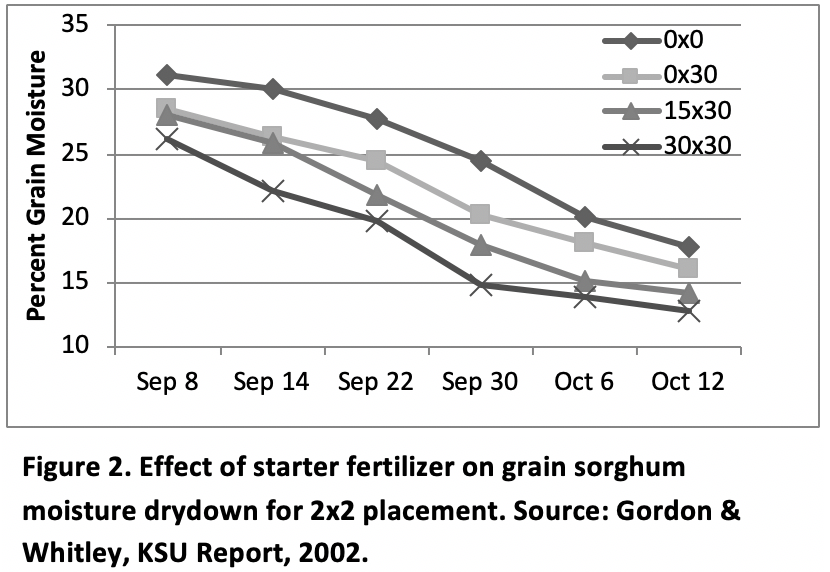