Although the corn earworm prefers corn, it can infest sorghum. The earworm can grow to two inches in length and has a light brown colored head with a body color ranging from green, pink and yellow to almost black. A pale striped line above a dark stripe runs down its side the entire length of its body. A dark stripe divided by a narrow white line runs down its back.

The fall armyworm is green in color when first born but gradually turns grayish brown. Its most distinguishing characteristic is an inverted Y on the front of its head and dark lines running lengthwise along its upper side. At maturity it may reach 1.5 inches long.

A sorghum webworm is smaller than the corn earworm and fall armyworm. It is flattened and yellow-greenish in color with four lengthwise dark stripes. Mature webworms are covered with hair, which can be irritating to some people. The webworms do not spin webs but will suspend themselves by spinning a thin silken thread when disturbed.

The adult moth of headworms can lay several hundred eggs on sorghum grain heads before, during and after flowering. However, only a few survive after hatching due to natural predators, parasites, pathogens and cannibalism among the larvae. The headworms feed on the flowers and developing kernels, which can cause severe yield loss if left uncontrolled. Headworms are much easier to control when they are small and do not cause as much yield loss as the larger worms. Control measures are typically justified once headworms exceed one-fourth of an inch in length.

Both the corn earworm and fall armyworm can infest and feed on the leaves of sorghum prior to heading. Feeding can occur from plant emergence through grain maturity. The damage caused may look dramatic as leaves will appear ragged with a straight line of holes running across the width of the sorghum leaf. However, the sorghum plant can withstand a considerable amount of leaf feeding before any control measures need to be taken. To find the larvae the whorl leaf must be pulled from the plant and unfolded. As the larva feeds in the whorl it produces frass (excrament) that will often be visible in the whorl. There will seldom be more than one larva per whorl. Typically at least 40 percent of the plants need to be infested with significant damage occurring before an insecticide application is justified.

Scouting for headworms should begin immediately after the majority of the sorghum heads in a field have finished flowering. The small recently hatched worms can be hard to see when they are in the sorghum head. A common scouting method is to bend the sorghum head into a clean white bucket and shake the headworms off where they can then be counted. Threshold levels may vary with the size of the headworm and the value of the crop. Typical thresholds are 1-2 larvae per sorghum head depending on the value of the crop and cost of the insecticide. Since webworms are much smaller than corn earworms or fall armyworms, the threshold for their control is usually much higher. Insecticide application can be delayed until five or more larvae per head are present.

There are several effective insecticides available for control of headworms. However, if sugarcane aphids are also present in the field it is strongly advised to use an insecticide that will maintain the beneficial insect population. Examples of insecticides that should be considered for headworm control when sugarcane aphids are present are chlorantraniliprole (Prevathon®), and spinosad (Blackhawk®). 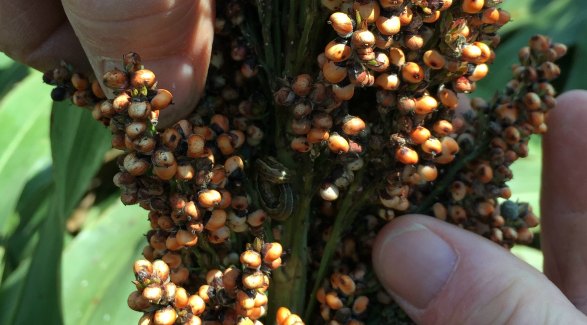