Nothing looks more beautiful in agriculture than a weed-free, uniform stand of grain sorghum after heading. Unfortunately, and to different degrees, sorghum fields sometimes have plants or stalks that are uneven in maturity or in height and appearance. Assuming uniform emergence, the difference in maturity is often caused by the ability of sorghum to tiller and grow additional basal stalks that produce heads later than the main stalk. This difference is largely influenced by early season environment and, to some extent, the genetics of the hybrid.

Anyone who has seen a modern sorghum breeder’s nursery is well aware of the genetic diversity of sorghum that results in a wide range of plant characteristics or phenotypes. The sorghum genus is made up of not only grain sorghum but forage sorghum, sudangrass, sweet sorghum, broom corn and weeds such as Johnsongrass and shattercane. When a sorghum plant is found in a commercial field that differs in appearance from the sorghum variety planted, it is typically called an off-type. These off-type sorghum plants cause unevenness in height and plant morphology. These off-types originate from volunteer plants from seed deposited in the soil from previous sorghum crops, introduced into the field by birds, animals, machinery, etc., or from seed that is present in the planted seed. In sorghum fields planted following sorghum the previous year, off-type volunteer plants result from the segregation of characteristics in the offspring of the previously planted hybrid. If the off-types originate from planted seed in the current year, they will grow as individual plants spread uniformly throughout the field in the seed rows. The origin of off-type plants in the planted seed row may occur from contaminated seed boxes from previously planted seed, from a mechanical mixing of seed, or occasionally from outcrosses that may occur in the production of hybrid sorghum.

Off-types originating from outcrosses in the production of hybrid sorghum seed are inherent to the use of male sterile plants that do not produce pollen, which is key for producing commercial hybrids. In producing a hybrid, a male sterile parent is grown in a seed production field in a pattern of alternate rows with a male fertile parent. Pollen from the male fertile parent is transferred to the male sterile parent to produce hybrid seed that is harvested and then sold to growers. This system has proved very successful but, unfortunately, makes the male sterile plant susceptible to fertilization by foreign pollen from sorghum plants in or near the seed production field. Commercial seed production fields are isolated from other sorghum and wild species, but on occasion, foreign pollen can find its way to male sterile plants because sorghum pollen can move several miles by wind. The resulting seed looks identical to the desired hybrid seed and thus can end up in the bag of seed planted by the grower. Plants originating from these seed are called outcrosses.

Off-type sorghums can be divided into five distinct groups:

As the name implies, these plants are 1-3 feet taller than normal plants and are the most common off-types. However, other than the height difference, they are identical to the normal plants. Four dwarfing genes control plant height, and the tall height mutant is a result of the dw3 gene becoming unstable. Parental genotypes will vary in their frequency of producing tall mutants. With the use of genetic markers and other modern techniques, seed companies can greatly reduce the frequency of tall mutants by indentifying stable versions of the dw3 gene. However, since these tall mutants have no effect on yield, some seed companies place more emphasis on this characteristic than others. 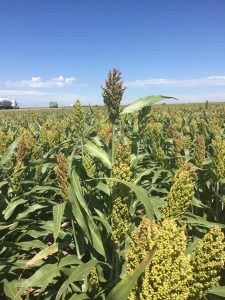 These plants are usually similar in height to the desired hybrid but may have very different seed color or panicle shape. Seed colors may be red, bronze, yellow, brown or intermediate shades. These off-type plants are a result of foreign pollen, which is usually from grain sorghum, that contaminates the seed production field. Since these plants are grain sorghum, they are of little consequence in most commercial fields. 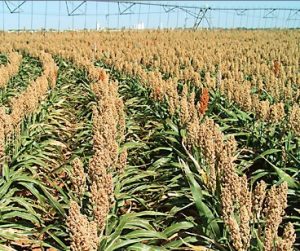 This group exhibits characteristics associated with forage sorghum, meaning that the plants are normally tall and single stalked with a typical grain sorghum-type panicle. Their maturity may be similar to the planted hybrid or much later. These plants originate from outcrosses from forage sorghum pollen in or near the seed production field. Because of their height, these plants can be pushed under the combine carrying the planted grain sorghum hybrid and result in lost grain. Since the seed from these off-types are not harvested, they can serve as a source of volunteer the following year. 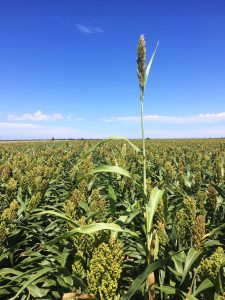 The pollen source for this outcross type is usually from sudangrass , sorghum-sudangrass or shattercane in or near the seed production field. Plants can vary greatly in height and plant appearance and typically produce numerous tillers. The panicles are more grasslike, in that they are loose and open, and are usually taller than the grain sorghum. The seed are highly fertile and easily ‘shatter’ from the panicle. The seed are covered by long, dark brown to black colored glumes that protect the seed in the soil allowing them to remain dormant for a number of years. Research conducted at the University of Nebraska found that seed from shattercane can remain dormant in the soil for as long as 13 years. 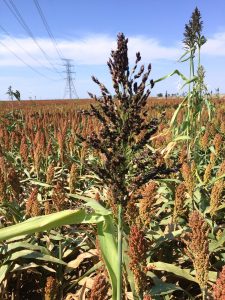 These plants occur when Johnsongrass pollinates the male sterile plants in the production field. This type of cross-pollination does not occur often due to the genetic incompatibility between Johnsongrass and grain sorghum. When it does occur, the resulting plants have rhizomes but seldom produce any viable seed. Plants are typically Johnsongrass-like in appearance with slender stalks, many tillers and an open panicle. The primary risk of volunteer plants the following year is from rhizomes. This will potentially be more of a risk in southern environments where soil temperatures are milder during the winter, allowing the rhizomes to survive and produce plants the following spring.