Pre-harvest sprouting of grain occurs in all crops but can be more of an issue in sorghum because of the exposed nature of the grain. Sprouting becomes an issue when sorghum grain has reached maturity and is exposed to long periods of wet, warm weather. How quickly sprouting occurs is dependent on several factors including rainfall, humidity, temperature and wind.

Sprouting occurs following absorption of water through the seed coat in combination with warm temperatures which are sufficient in leading to germination and the emergence of the root radicle. Typically, root radicles are easily observed under close examination of the sorghum head but several days of dry weather may make the radicle inconspicuous. The grain itself may become discolored and the inside may take on a chalky texture as the starch and protein begin to break down. 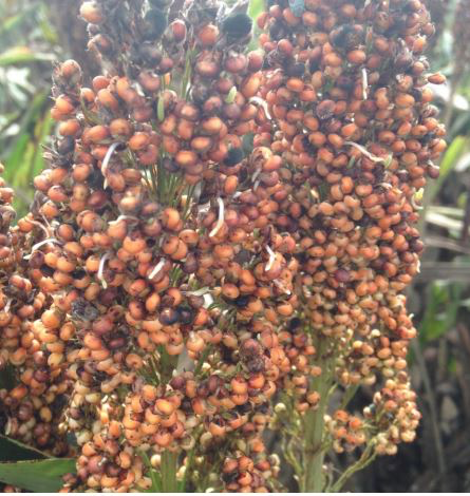 When scouting for pre-harvest sprouting, it is easy to overestimate the percentage of grain that has been affected. The entire sorghum head should be examined as differences can exist between the top, middle and bottom portions of the head. When evaluating a field for sprouting, growers should look for grain which may have shattered and is on the ground. While sprouting may not have occurred, shattering has been observed under prolonged wet conditions.

Mold is often associated with weathered or sprouted grain; however, mycotoxins are seldom an issue in sorghum and incidence of these toxins has not been shown to increase among sprouted sorghum. There are multiple competing fungi present which limit the growth of fungi needed to produce mycotoxins.

Often a sorghum head will appear to be turning black from mold growth. Upon closer examination, a lot of the black color is a result of glumes surrounding the seed. When the seed begins to sprout, the root radicle pushes the kernel out of its normal position within the glumes and falls to the ground. These exposed glumes, which are often naturally a reddish purple color, contribute to the black appearance of sorghum heads.

The main grower impact of pre-harvest sprouting is the potential for decreased sorghum grade. Sprouted sorghum falls into the damaged grain classification for grading purposes. U.S. No. 2 grade sorghum can have no more than five percent damaged kernels. Grain with greater than 15 percent damaged kernels falls into the sample grade classification, heavily discounting price. Additionally, sprouted sorghum can have lower test weights.