The Early Life of a Sorghum Plant

Similar to people, the sorghum plant is greatly influenced during its early development on what it is going to be later in life. How it is treated and what it experiences in its first 30 days will impact its health and potential yield afterward. To establish a solid foundation for high yield the first objective is to obtain a healthy, uniform stand at the correct plant population for a given environment. Good moisture conditions and adequate nutrition close the germinating seed is critical. Since roots have not yet expanded a starter fertilizer will often help in establishment. Once the crop is established, a grower should know the importance of recognizing the different vegetative stages and understand how management during each specific stage can impact yield. Although infrequent, cutworm damage can occur during the first few days after emergence. An insectide application should be considered if the majority of the cutworms are less than 1/2 inch long.

Early growth stages are determined by counting fully expanded leaves with the presence of a leaf collar. The first leaf is the coleoptile leaf, which is shorter than the later-emerging leaves and has a rounded leaf tip. Usually within 10 to 14 days after emergence, the sorghum plant has three fully expanded leaves and is only 3 to 4 inches tall. If a preemergence herbicide, such as Dual or Outlook, was not applied prior to emergence, the herbicide should be applied during this stage. Atrazine also can be applied without any risk of sorghum injury. Even if these herbicides were applied preemergence, growers should access if these herbicides were fully activated and reapply at this time if necesary. Both drought and too much rainfall can sometimes cause preemergence herbicides to fail.

In the first 20 days any productive tillers will appear at the base of the plant. The number of these tillers is determined by hybrid, row spacing and seeding rate, as well as the early environmental conditions. Because the plant is very small, competition from weeds over the first 30 days of the life of the sorghum plant can greatly impact yield. If weeds have emerged, growers should control them with a postemergence herbicide. 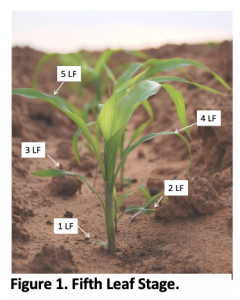 A sorghum plant typically reaches the five-leaf stage 20 to 25 days after emergence, when the plant is approximately 8 inches tall (Figure 1). The roots should be rapidly expanding and the growing point is still below the ground surface but not for much longer. If a grower plans to apply 2,4-D or dicamba, the best application time is between the third- and fifth-leaf stages. After the fifth-leaf stage, labels of other herbicides should be carefully examined prior to application to determine if and how the herbicide can be applied safely. A good time to apply nitrogen fertilizer as a side-dress treatment is between 20 and 35 days after emergence. 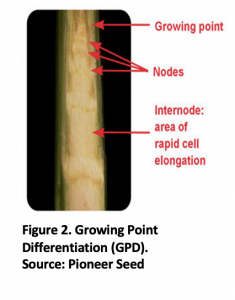 At 30 to 40 days after emergence, the crop reaches the critical growing point differentiation (GPD) stage, where the plant shifts from producing only leaves to beginning the formation of the grain sorghum head. The GDP stage occurs at the seven- or eight-leaf stage, when the plant is 12 to 15 inches tall. If one or two of the lowest leaves fall off of the plant, a grower may find it difficult to determine the actual leaf stage. To determine if the plant has reached the GDP stage, the grower can slice the stalk open and look for the growing point, as shown in Figure 2. If the growing point is visible above the ground, the plant is in the GPD stage. Prior to the GPD stage, the plant can withstand considerable stress, including hail damage, with minimal effect on yield. Herbicide application becomes much more risky at the GDP stage and any stress on the plant can reduce head size and potential seed number per head. The GDP stage means the crop is entering into a phase of rapid growth with accelerating uptake of water and nutrients.

These ‘teenage years’ culminate in the boot stage which occurs just before head emergence and flowering. In the boot stage, collars of all leaves are visible and the sorghum head or panicle is located just below the flag leaf collar, enclosed in the flag leaf sheath. Just below the flag leaf, the stalk appears swollen. The sorghum head will emerge within as few as three days. Moisture and heat stress over the next 20 days can greatly influence final yield. Water and nutrient use are at their peak. Growers should closely monitor sugarcane aphid infestation levels prior to and throughout the boot stage. If sugarcane aphid populations increase above the established regional threshold, an insecticide should be applied immediately.