When to Terminate Irrigation in Grain Sorghum

Many sorghum growers struggle with the question of when to stop irrigation during the growing season. The answer requires a look at a sorghum plant’s water needs throughout its stages of development.

Maximum water use in sorghum occurs between the boot stage and the early soft dough stage. During this period, in most regions, the average daily water use can exceed 0.25 inches. On hot, windy days, water demand can be as high as 0.35 inches. Then, as the crop begins to mature, the daily water use gradually decreases until the grain reaches physiological maturity. Sorghum plants take approximately 40 to 45 days to progress from flowering to mature grain. To reach the potential yield set at flowering, growers need to supply adequate water throughout the soft dough stage of development. 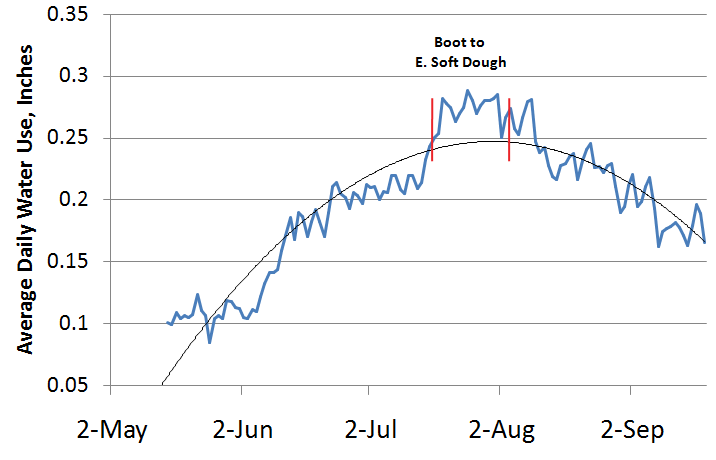 Growers can consider irrigation cutoff once the sorghum grain has reached the hard dough stage, when the grain color has changed throughout most of the sorghum head. The decision to terminate irrigation should be made only after careful consideration of stored soil moisture and anticipated rainfall. At the beginning of the hard dough stage, the grain has accumulated approximately 75% of its final dry weight, the moisture content is 50% to 60%, and the grain can no longer be crushed by pinching it between the index finger and thumb. At the hard dough stage as much as 2 inches of water can still be used by the crop. Soils with more sand content hold less water and are more dependent on timely late-season rainfall or irrigation. Plants need late-season available soil moisture to maintain stalk strength in high-yielding environments. As long as the plant remains green, it requires some water to maintain stalk integrity. Lack of adequate soil moisture to maintain the stalk can lead to an increase in lodging.

Grain physiological maturity can be difficult to recognize but typically takes about 14 days to reach once the grain is in the hard dough stage. A dark spot at the base of the kernel indicates that the grain has reached maturity. At maturity, the moisture content of the grain is usually between 25% and 30%, and starch accumulation has reached its maximum. The dry down rate of the grain after maturity depends on the temperature and relative humidity of the environment, and the rate typically ranges from 0.5% to 1.0% a day.