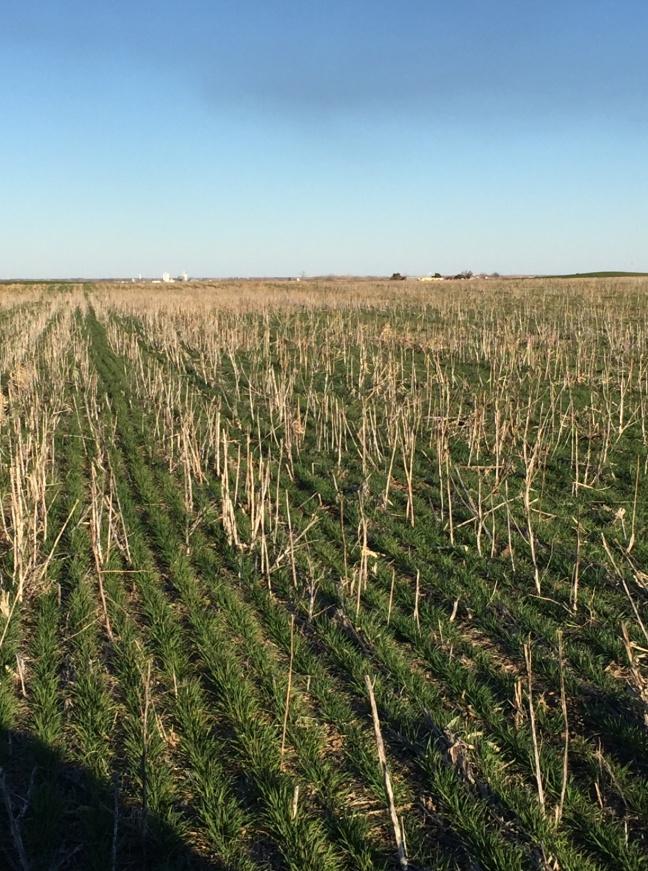 Double cropping wheat behind corn is a common practice in some areas but less so behind sorghum. This is largely due to two reasons: 1) corn is planted on more irrigated acres or in regions with higher rainfall than sorghum, and 2) corn is usually harvested earlier allowing more time for wheat planting. However, with a little management and planning, growers can successfully grow wheat behind grain sorghum. The date of planting is important to growing a successful winter wheat crop. Optimum planting date varies with different regions and environments. In semiarid regions, planting too early may result in the crop depleting valuable soil moisture during the fall and taking away water that could be better used in the spring. On the other hand, planting too late may limit the rooting depth of the wheat before going dormant in the winter, which can hamper the wheat’s ability to use water from deeper soil depths in the spring. In addition, tillering is often reduced when wheat is planted past the optimum planting date.

To plant wheat as close to the optimum time as possible, growers need an early harvest of grain sorghum. Two primary factors influence the grain sorghum harvest date: planting date and number of days it takes for a hybrid to reach maturity. Planting early and choosing a sorghum hybrid with a maturity rating that will allow for an early harvest are critical. In addition, once the plants have reached physiological maturity and the grain has dropped to less than 20% moisture, growers should consider applying glyphosate to kill the sorghum rather than waiting for a killing freeze. By using glyphosate, the sorghum plants cease using soil water that can be used by the wheat crop.

Around the coffee shop, it is not unusual to hear a grower say wheat cannot be planted behind sorghum because the crop produces a toxic substance harmful to wheat. Although sorghum does produce toxic compounds that can be harmful to other plants, the effect on wheat under field conditions often is overblown. Many growers routinely plant wheat behind sorghum without any issues. However, to minimize any allelopathic (toxic) effect of these compounds on wheat, the following management guidelines may help:

When planting into sorghum stubble, growers should add 30 pounds of nitrogen over the normal rate. The additional nitrogen will help break down the sorghum residue, overcoming any issue of nitrogen being tied up by the residue, and facilitate wheat tillering to insure a sufficient stand

Want to stay up-to-date on all things sorghum? Sign-up for our newsletter.